Zennin Shiboudesu have been announced for both the 3DS and Vita for the English community under the name of “Zero Escape: Virtue’s Last Reward“. No date for it though. >.>

Oh well. Shiboudesu talk anyways because no one else on my twitter plays it! Or anyone else on places outside twitter! I need a place to vent! No has gaf account do not suggest.

Spoilers happen, so after the cut. 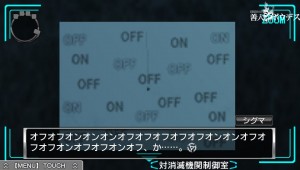 The game started off like a normal, usual nonary game (waitwut), ‘cept this time the game’s not focused as much on 9-everything. In fact, 9, haven’t really meant much off the one road I did so far.

This time around, Chun Soft included an interesting new feature called “Secrets”. Basically, in every escape room, keys needed to leave that room is locked in a safe. The safe have two passwords to it, one for the keys, and the other one for files in gold or silver color –depending which difficulty you’re playing on– that offers background info on the characters, the game, and the different terms introduced. They’re not required to escape a room, but we all wants to read them, no? :3

…Then yeah, you get send into either an infinite time loop (that “To be continued” screen, it mocks me) or down another river in the timeline. Or at least, what I assumes to be the rivers.

On the characters themselves… Sigma talks a whole bunch. :| Phi’s seiyuu is flat. Period. Quark is Kugyuuuu(ry Dio is annoying. Alice is, um, how does that even work? Yotsuba reminds me of everyone else from the first game. Don’t really have any opinion on Tenmyouji and K yet. Wonder who K really is though.

Uchikoshi totally leveled up his lolwaitwtf skill on the dialogues. >.>

…Yeah. I think I’ll shut up and go back to finis this route of trust.