I don’t actually know if it’s spell as Aspal. Teehee. 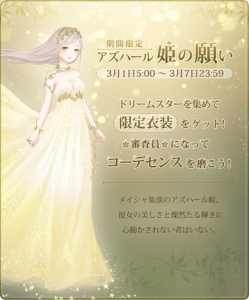 This event is much easier on our sanity when compared to the previous event where you’re at the mercy of RNGesus. I never completed any of the previous event’s sets because of that. Anyways, details after the cut.

END_OF_DOCUMENT_TOKEN_TO_BE_REPLACED 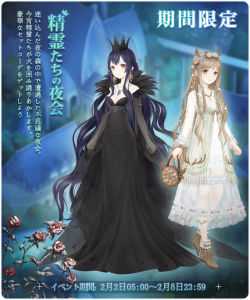 Event: Banquet of the Fairies (精霊たちの夜会)

Do fashion battle in the 5 stages in event map, collect Moon Flowers. Moon Flowers are used to exchange for the forest girl style set, and your total Moon Flower collection count goes toward you gaining patterns for the dark queen style set. You can do 5 battles per stage every day, for a total of 25 battles. Each battle costs 4 stamina and each stage let you reset for 30 gems. Rank A gets you about 6 flowers each. Don’t know how to pull S. Details behind the cut.

END_OF_DOCUMENT_TOKEN_TO_BE_REPLACED

One of the new thing added following last week’s update was parallel world, where everything there is rare. Me and my teammate found ourselves in one earlier the day, and I love you, SEGA. :D 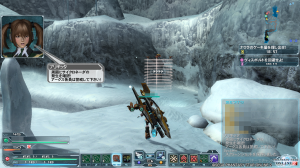 Basically, when the portal to the parallel world shows up, a fanfare plays (which is pretty obvious, you can’t miss it…unless you turned sound off). Somewhere in the map there will be a rainbow colored teleporter that sends you to ????. Once there, you’ll see another portal similar to the ones that send you to a boss field, and as soon as that activates an emergency trial to eliminate rare monsters will go off. 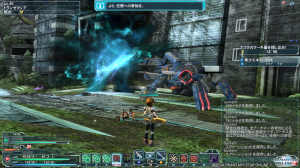 We were lucky and ran into some Signo Blues and um…Tran…Tran…Tranzexia? Man I don’t even know what they’re called. .-. Anyways, yeah, an interesting thing about this was that the Tranzexia did an attack that I have not seen before. Wonder if it’s exclusive to this area? The other interesting thing was, this area really resembles Shibuya in 7th Dragon 2020. ‘v’ Sure it’s similar to a bunch of OTHER things, but it’s SEGA! SEGA did 7th Dragon 2020! So yeah. \o/ 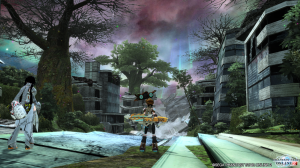 Wish I could stay there and take pictures, but this happened during the Xmas on Ice emergency mission, so I had to run. The next time I’m totally staying to take more pictures. ;_;